Right now, in the Allen Elizabethan Theatre at the Oregon Shakespeare Festival in Ashland, Oregon, a new play is in the repertory. It was written by (fun fact) the most-produced American playwright of the current theatre season (outside of Shakespeare), Lauren Gunderson. The play is called The Book of Will and concerns the assembly and printing of the so-called First Folio edition of Shakespeare’s plays, published some seven years after his death. I haven’t seen or read the play (more than what’s freely available online, that is), but it is billed as a sort of paean to the Bard and his works; a lively, if fanciful, history of events we know very little of, sad to say, but which by golly we’re glad occurred (however they occurred) because without them you wouldn’t be reading this—nor coming to various sites in beautiful northern Arizona settings to see Flagstaff Shakespeare Festival performances. 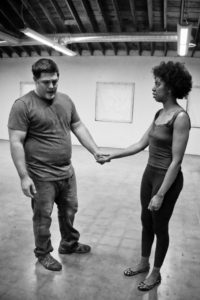 “What if all the words were lost?” poses a headline at O-Shakes’s web page about the play. What indeed. The world would be a very different place, no doubt whatsoever. Well, for one thing, there’d be no Shakespeare festivals anywhere—beautiful outdoor settings or not! And so much more than that: the whole rich, heart-opening, weep-inducing, belly-laughing, tragical, astounding, uproarious mess that is Shakespeare’s canon—gone! A void in the world? Nay, a veritable cavernous maw, I say!

Whoa, dial it down, Ben. We’re all on the same page here—those brilliant, scintillant pages that Heminges and Condell managed to wrest from the transient flux of Elizabethan (well, Jacobean) life 400 years ago. May your place in Heaven be assured, you great men of the theatre!

And truly, that’s the crux: these forward-looking men committed to paper (itself a transient form, but let that go) those great stories and poetry of the King’s Men’s man. Think about that: dramatic art on paper. The soaring words and themes and living drama of the Western world’s greatest dramatist flattened out like so many squashed ants. How could it be done? More importantly, how can those squashed ants be resuscitated into living drama once again? How can those dry, flat symbols magically expand into three dimensions? Four—bodies in motion in space and voices on the air!

As a symphony orchestra brings to life the great works of Mozart or Beethoven or Mendelssohn from the lifeless lines and dots of a symphonic score, we, a company of actors, must first interpret, then breathe our own life into, this flat suggestion of an idea of a concept! Impossible! 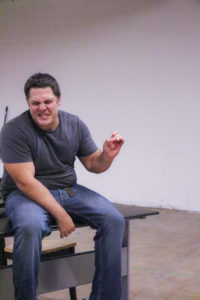 As the text and speech coach for Flagstaff Shakespeare’s production of The Taming of the Shrew, that’s the nut I’m trying to crack. And such a delicious, impossible nut! Our director, Jesse Kamps, and fearless leader Dawn Tucker have entrusted me with the task of helping my fellow actors bring to vibrant life the “mere words” of a man 400 years dead. My task is twofold. The first part is to make sure the actors understand the text. What do the words mean? What is the sense of a phrase, a line, a speech? What is happening in the scene? Does this word or phrase mean the same thing now as it did when Shakespeare wrote it? The second part is to make sure the audience understands the same text, but this time as speech. The difference between text and speech, though it may appear largely mechanical (anyone who can read could do it, right?), is fraught with challenges. And the difference between merely well-spoken text and living, breathed-and-breathing Shakespearean language that is both comprehensible and bursting with meaning—well, that’s another matter entirely.

Consider how we humans communicate. Before the advent of all our many analog and digital communication devices, human communication (aside from writing) was a full-body experience. For those possessed of all senses, we “spoke” across the wide bandwidth of sight and sound, producing a complex of audio-visual information directed to the receiver. You don’t have to be Italian to appreciate the value of a good gesture! In the Digital Age, we’ve constricted that bandwidth enormously, into narrow streams of inflexible data that tend to denude, rather than enrich, communication. Just think of how often intentions are mistaken in a text message or an online comment thread and you’ll know exactly what I’m on about.

Shakespearean language, though essentially modern English (technically “early modern English”), is different from our contemporary English not so much because of linguistic changes in vocabulary, syntax, and grammar—though these do differ, somewhat, from ours—but because of the particular ways Shakespeare used the language at his disposal.

He pushed its boundaries and then cracked it wide open. I imagine that, were he alive today, he would be writing things as newfangled and mind-blowing now as they must have seemed to the Elizabethans then. He rose above the limitations of his own language and made it a servant to his art. That’s what makes it hard to understand more than the changes in English over the centuries. He was a poet—he used language differently from others, elevated it to a new plane. 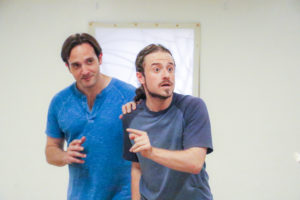 But in his plays Shakespeare wasn’t, strictly speaking, writing poetry—he was writing drama. It was meant to be seen and heard: enacted. So merely speaking the text aloud in a clear voice is insufficient to convey its complex meaning from actor to audience. The task requires another avenue, another methodology. I believe that methodology to be the subtle, unique combination of an actor’s understanding of the text expressed through a range of vocal properties (inflection, pitch, rhythm, pacing) plus the bodily aspects of acting: posture, gesture, facial expression, carriage, and more. Done well, the resultant mixture is rich with expression and can render complex and expansive ideas into a perceptible form that can be easily understood by an audience, regardless of the differences in the language itself.

And that’s where I’m investing my efforts as text and speech coach. I must examine each actor’s expressive output and evaluate its effectiveness, then help them to modulate or enhance that output when it is ineffective or its meaning is unclear.

That work requires an appreciation of the actor’s gifts and limitations, an ability to adapt to their style of learning, and a thorough knowledge of the tools available to assist them in this quest to convey meaning. Easy-peasy (he said hopefully)!

It is indeed fortunate that I find myself working with a cast with many gifts and a great enthusiasm to succeed in telling Shakespeare’s story. We’re all definitely committed to producing the clearest, most delightful, thoughtful and engaging Shrew that we possibly can. And you, our dear and commendable audience, will determine how well we have succeeded. 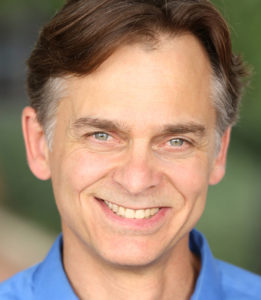 0 comments on “A Deeper Interpretation: The Value of a Text and Speech Coach”