Every time I teach Othello, I begin by telling my students that I long for the day when we read the story and say, “Well, this sure is pretty poetry, but we’re past insidious racism and double standards with regards to infidelity, so this really isn’t relevant.” Until then, tragedy will continue to be the most important social tool we have for talking about our social and emotional responsibilities to one another.

Titus is much the same as Othello; it is, unfortunately, as relevant now as it was in the 1600s.

Titus Andronicus sometimes gets a bad rap because of the “unrealistic” amount of violence. There is a lot of bloodshed in the play, but sadly, it’s nothing you wouldn’t encounter in any of several war-torn countries in the world at present—especially those where the citizens have, as have the people in Titus, been embroiled in violence for multiple generations. It is universally true that violence begets violence. There’s a little Quaker church on Beaver Street here in Flagstaff whose banner proclaims, “There is no way to peace, peace is the way.” Titus exemplifies this lesson as the characters concoct violent and complex revenge plots against each other, but no one ever feels any “peace.”

Titus was Shakespeare’s most frequently produced play during his lifetime.

People often explain the play’s 16th-century popularity by undercutting the intelligence and taste of the Early Modern English society. I think that’s hardly fair. Sure, they watched dogs kill bears for entertainment and drank beer at almost every meal, but don’t we have YouTube and an opioid crisis? Elizabethans who were educated were very well educated, and those who were illiterate were still listening to some of the most evocative poetry and rhetoric available, in churches and playhouses. I think they loved Titus for the same reasons we love “House of Cards.” Titus held a mirror up to the blackest parts of the Elizabethan culture.

Our production will both lean into the absurdity perceived by the modern audience and provide, through movement and music, visceral pathways to understanding it in a modern context.

I’m really looking forward to directing this play. We’ve assembled an incredible group of artists, onstage and offstage, and I have no doubt that the show we put together will be not only spectacular and fun but meaningful and shrewd. Violence committed by one human being upon another should always be abhorrent to us, but not because of the gore or spectacle. It should not horrify so much as it should sadden. When I’m directing Titus and working with our combat choreographer, I will be focused on the human life under assault and on the loss that follows a death. This will not be a “Game of Thrones” style “slash um and forget um” play.

Then we can all look forward to contrasting this early play about revenge with Shakespeare’s later and more mature work, Tempest.

In contrast to Titus’s exclamation,“I shall never come to bliss/Till all these mischiefs be return’d again/Even in their throats that have committed them,” Prospero’s final resolution to let his (or her) enemies walk away unpunished because, “the rarer action is/In virtue than in vengeance” shows how time and experience changed Shakespeare, both as a playwright and a man.

This picture was taken during a “down” moment on set. In this picture, I am not playing May, yet when I look at this picture I don’t see myself: I see May. And I miss her. May is hard to say goodbye to and dangerous to hold onto.

In the blog I wrote when we started work on this show, I talked about how little of myself I saw reflected in May and how I didn’t see her as a “feminist character.” Over the run of the show, my sentiments almost completely reversed.

May’s brutal honesty and fierce desire to break away from the dysfunctional patterns she’s inherited from her addict father are qualities I admire and know too well.

In my favorite moment of the play, May believes the woman Eddie has been cheating with is on the other side of her hotel room door. This woman has already shot at May and blown the windshield out of Eddie’s car, but when Eddie tells May to hide, May’s brazen response is, “I’m not gunna hide in my own house. I’m goin’ out there. I’m goin’ out there and I’m gunna tear her head off. I’m gunna wipe her out.” She believes she’s invincible. She is invincible. It’s intoxicating to inhabit her skin in that moment. I know I’m not invincible. In fact, I suffer from pretty severe anxiety, so May gave me the gift of being totally sure of who I was and what I was capable of accomplishing; it’s something I will relish and go back to for the rest of my life.

On the other hand, I see the darkness in May. The danger is in relishing too much her reckless way of living and loving.

So, it is with very mixed feelings that I say goodbye to May, but mostly I owe a great debt of gratitude to her and to Sam Shepard for penning her. I hope we do Shepard again soon. If I ever get to play May again, I’ll absolutely jump at the chance.

When I first pick up a script and start to work on a character, I look for commonalities between myself and my experiences and the character and their experiences. I recognized May immediately. May was the darkly romantic vision I had of myself at 30 when I was 16. When you hear her story, it sounds thrilling. No attachments, no responsibilities, unbridled passion. In reality, it’s a very sad life. No family, no career, no stability.
As a feminist, I’m always interested in my character’s emotional, intellectual, and creative life, not just her romantic life. The thing with May is, she doesn’t have any passions besides Eddie. Often, in Shakespeare, I have played women who are very similar to May. Hopelessly in love and with no real idea of their future outside of the men they are aligned with. Somehow, May is more helpless than any of them. And this play definitely doesn’t pass the Bechtol test. So, how, as a feminist, do I approach this kind of play? It’s a strange thing for me, a woman with so many passions outside of romance. Happily, I have someone I choose to share my life with, but many of my pursuits are entirely independent of him, like teaching, creating, and learning. But just as strongly as I believe women have a right to agency outside the home, I believe the stories of women who live their lives for and with others deserve to be told. Their voices are not to be silenced; their lives are not of any less value. Now, I know a man wrote May and I know Shakespeare was a man as well, but to me, characters have lives beyond their authors, and it is an actor’s job to bring them fully to life.
Telling May’s story begins with a setting aside of judgments so that I can work on understanding her and, eventually, loving her enough to do justice to her story. It’s important because May’s story is full of truths that mirror the lives of many women — from the Renaissance to today. And they all deserve to have their stories told.
At our founding, our mission included a commitment to “Shakespeare and classics of the American stage.” Recently, we expanded that to “Shakespeare and other actor-driven plays.” Still, for our first non-Shakespeare production, it seemed right to honor a playwright of the American stage and, more specifically, the American Southwest.
Sam Shepard, who passed away last year, was nominated for a Pulitzer Prize for Fool for Love, a play that explores the very American themes of identity, Western culture, and rootlessness. When news of Shepard’s passing reached me, I thought immediately how appropriate it would be to honor him by choosing one of his plays for our first non-Shakespeare show. Fool for Love was a play Shepard both directed and acted in, so it is especially appropriate to honor him with a presentation of this desperate and passionate drama about love and family. 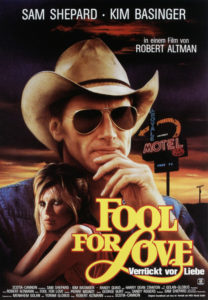 With biting humor and riveting passion, Fool for Love asks us to take a hard look at our own family legacy. And that’s the way Sam Shepard saw the world: desperate, passionate, humorous, and biting. The two lovers in Fool (or perhaps, the two fools), Eddie and May, embody the harsh realities and stark beauties of life in the 1980s Southwest. They are Shepard’s “star-crossed lovers,” and that makes this story a perfect fit for FlagShakes.
Another reason this play works so well for FlagShakes is the surrealism of the presence of the “Old Man,” a character who existed in Eddie and May’s pasts and whose presence is still so visceral that, even though neither of them has seen him in 15 years, he participates in the action of the play. The “Old Man” also talks directly to the audience. This character who is both of and not of the world of the play and who speaks to the audience directly reminded me very much of many Shakespearean characters; the ghost of Hamlet’s father, Gower in Pericles, Lear himself.