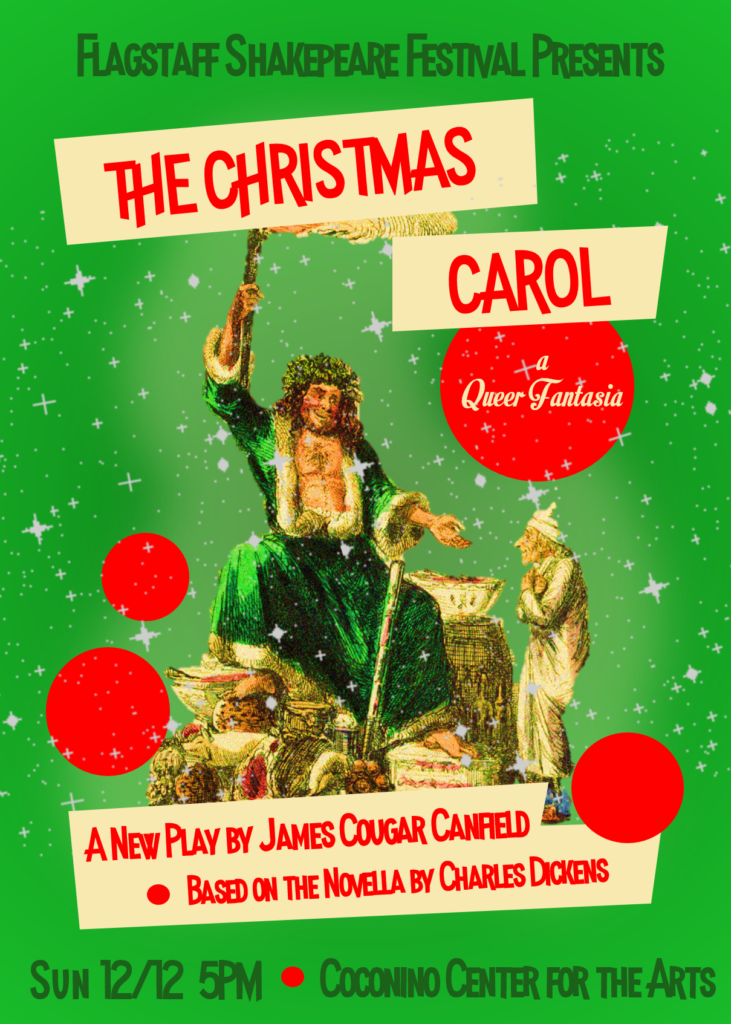 The Christmas Carol: A Queer Fantasia

Coconino Center for the Arts

Ebenezer Scrooge is the literal worst. And it’s going to take some serious fabulosity to turn this ChristMESS into a ChristYAS. Can three otherworldly spectres show this humbug the true meaning of Christmas? The iconic Dickens Ghost Story of Christmas gets turned on its head in this inclusive, timely adaptation of the classic that explores what it means to walk among your fellow humans regardless of how they look and who they love. The Christmas Carol: A Queer Fantasia received its world premiere at Access Theater in New York City in December 2019. The show was met with acclaim: with sold out performances and being featured as a Must-See Holiday event by Local Adventurers, Metrosource, and Go magazine. The premiere was produced by Tier5 Theatre Company.
Poster design by Margaret Gorrell
James Cougar Canfield is an NYC based playwright, actor, and director with an MFA in Acting from East 15 Acting School in London. He is excited to be collaborating with Flagstaff Shakespeare Festival again after directing last year’s video game production of As You Like It and appearing as Sir Toby Belch/Antonio in Twelfth Night.
Canfield is the co-founder and current Executive Producer for Tier5 Theatre Company. With the company he has produced multiple shows and tours, including most recently the ongoing Tier5 Sings! virtual concert series and a completely animated production of Romeo & Juliet. His original play, Ladies in Waiting: The Judgement of Henry VIII has had sold out runs across the United States, United Kingdom, and Brazil, as well as winning the 2017 Hollywood Fringe Award for Best International Show. The play received its US regional theatre premiere in 2018 with Southwest Shakespeare Festival in Phoenix. Outside of theatre and film, Canfield achieved viral success by creating music videos to Broadway and pop classics through the video game, Animal Crossing. His hits include recreations of “The Schuyler Sisters” from Hamilton, “Oops! … I Did It Again” by Britney Spears, “I Put a Spell On You” from Hocus Pocus, and “Agatha All Along” from WandaVision. Canfield’s videos have been viewed over a million times across his social media platforms. IG, Twitter, TikTok, & FB: @james_cougar
BUY TICKETS